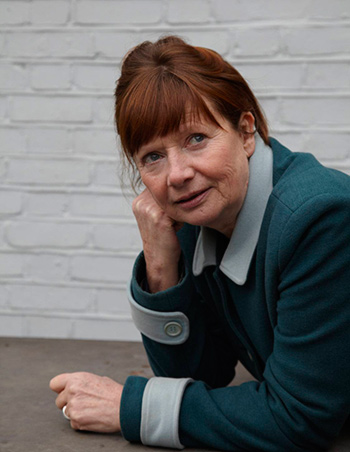 Birgitte Nystrøm was born in Greenland, and grew up in Greenland and Denmark. She trained as an actor at Statens Teaterskole (The Danish National School of Theatre).

Birgitte has worked extensively in Danish theatre, radio and television. Her work includes 5 years as Actor in Residence and Board Member of Copenhagen’s Cafeteatret and 12 years as a member of Turnus Theatre Company.

She has worked extensively with improvisation as a method of generating material for the theatre, resulting in award winning plays and critically acclaimed shows. She has had a long running collaboration with the business world using improvisation techniques for the purpose of training communication skills.

Birgitte currently works as an actor, writer and director. She is based in London.

Birgitte Nystrøm uses improvisation as a tool in a working relationship with various business led organisations, looking at training and developing communication skills for personnel at different levels, from directorial and managerial to sales and customer service.

It seems to me that people are the same when it comes to basic human emotions no matter which level they work at in an organisation and whether it be banking, nursing, car selling or public bodies.

A striking thing within training processes, where case scenarios are used as the primary tool, is how much any observer perceives, that is, how much they are able to tell when focusing on what goes on in a conversation, how accurate they read the non verbal or body language and how they detect every annoyance and every insincerity. Contrary to what some people believe, this effective form of training is not about “how to get away with it”, but rather it is about becoming aware of the underlying human interactions.

The training therefore has a laboratory-like context, where the personnel have the advantage of interaction with a professional actor and are able to safely try things out in a situation that is as realistic or “life like” as possible. In this environment the participants can detect patterns that might otherwise have remained hidden and can gain both insight and empathy for themselves and their colleagues or employees.

On a personal level this work has given me the freedom to play all sorts of characters and receive varying reactions that would have been impossible to script.